Do you own or manage a Business?

VirtualSafety provides compliance to serve and protect your:

Then register for a 30-day FREE TRIAL to experience VirtualSafety as your:

Use this customizable app to protect your:

A Safety and Health service provider (some jurisdictions call it Health and Safety) for every: 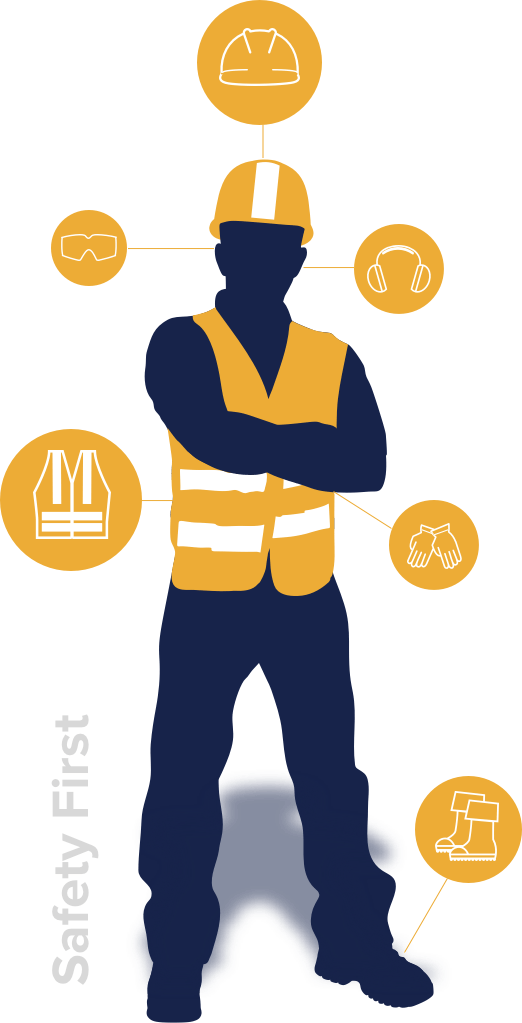 United States terminology has been used in this webpage, but can interchange with any other as follows:

Why are businesses using VirtualSafety? 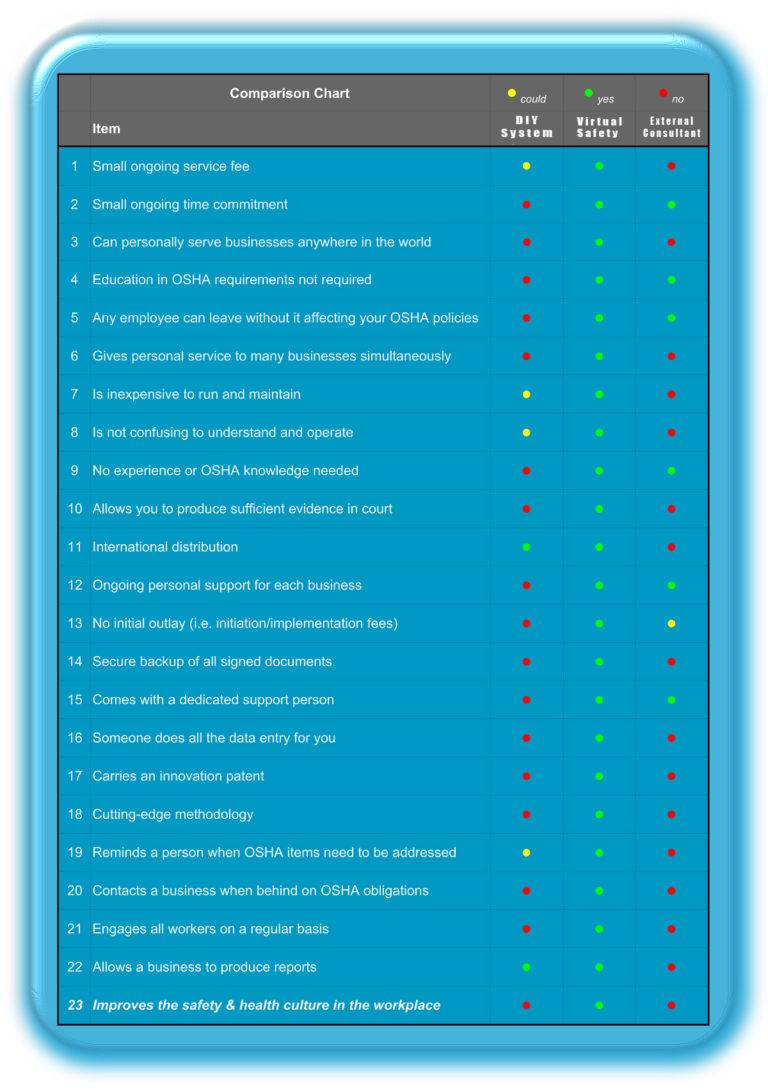 All safety & health monitoring will follow this modus operandi in the future because it’s quicker and easier and is functional in remote and difficult-to-access locations.
Worksites in deserts, jungles, arctic regions, and on certain off-shore rigs pose no problem as the app is functional anywhere and when offline.

Our state-of-the-art app works with experienced Virtual Safety & Health Professionals in the background, saving both time and money while triggering the right amount of employee involvement.

Help when you need it

When it comes to safety & health, it sure helps to talk to a real person whenever help is needed.

Built to be ‘value-conscious’

VirtualSafety comes with EVERY feature you need, including professional consulting. You will not find these features in any other paid system on the market. The average saving per worksite is $2000 per annum, with no sacrifice in function. Not to mention the costly legal consequences of non-compliance.

Simple is as simple does

We design apps for business owners, not Health & Safety professionals. We’ve designed VirtualSafety to take 20-30 MINUTES per month of your time (or 20-30 MINUTES per month of your appointed Safety & Health Coordinator’s time), so you can focus on your strengths while VirtualSafety professionals focus on your business systems and legal compliance, doing all the heavy lifting in the background for you.

Worksites with 6+ Employees automatically get Employee Tracking (in the Dashboard)

Register Now and speak with a specialist

Our service is not only about Safety and Health.
Our system lowers production costs, increases production rates and improves quality.

Safety Management must encompass both the hard and soft aspects of safety to produce an exceptional outcome.

Safety and Health has to be managed with the same degree of expertise, and to the same standards as other core business activities because of the high cost of failures.

No experience or knowledge in Safety and Health is required. The app knows and guides your monthly steps. We do all the heavy lifting for you in the background, with real people. Some business owners have their twelve-year-old child handling this app.

I only have one employee. Do I need this?

Even if only one person is employed, then the Person Conducting a Business or Undertaking (PCBU) is required by law to have a LIVE Health and Safety system that continuously works to improve safety & health risks.

Important Note: Host employers must treat a temporary worker like any other worker in terms of Training and Safety & Health protections. The VirtualSafety system will do this for you.

VirtualSafety has been using and perfecting virtual monitoring since 2002.
Drones started being used by OSHA Inspectors (USA) in 2016.

Virtual inspections are recognized and embraced worldwide because they’re safer and quicker, while a myriad of sensor combinations can also be added, such as thermal imaging.

Summary:
Drones and smart devices are enabling robotic automation without geographical restriction, and the opportunities for technological development and integration are advancing every day.

What happens if I’m using VirtualSafety, yet still have an incident?

If you’re not immediately sure what to do, call us or have a look at the Tips & Help in our VirtualSafety app. For emergencies, call 911 or other local emergency services.
Be sure to use VirtualSafety to help record the incident.

I’ve been negative, exposed, and at-risk by remaining non-compliant with mandatory Safety & Health legislation because I’ve believed it takes too much time and money without benefit, right?

No, not if you utilize the VirtualSafety app system and many of the innovations we see today in faster and cleaner tools are as a direct result of OSHA’s legislation requiring tool manufacturers and users alike to reduce risks in Safety and Health.
VirtualSafety continues to challenge the belief that Safety and Health burdens a business’s resources and continues to challenge current paradigms regarding the successful running of a Safety and Health system and is the only company to be granted an Australian Innovation Patent for its methodology.

I haven’t ignored Safety and Health Legislation, but to remain legally compliant, I engage the services of an External Consultant. How can I change to VirtualSafety’s quicker and cheaper system without hurting anyone’s feelings?

There are professional methods for implementing cost-cutting exercises. Like most entrepreneurs, you most likely relish making sales, but avoid cost-cutting initiatives owing to various emotional implications. We explain and give answers on how to deal with these difficult challenges in our Whitepaper

How is VirtualSafety able to offer so much for so little?

We can provide all this monitoring, legal compliance, and live one-on-one consulting with real people, just like yourself, because we’re a software company with international Safety & Health expertise.

How does VirtualSafety manage my Audit Trail records?

ISO 15489-1 establishes the core concepts and principles for the design, implementation, and management of policy, information systems and processes allowing people, organizations, governments, private enterprises, and collaborative coalitions to:
⦁ Create and capture records to meet requirements for evidence of business activity
⦁ Take appropriate action to protect the authenticity, reliability, integrity, and usability of records, as well as their business context, and to identify requirements for their management over time

I’m new to the business, and the less I know about industry regulations, the more I’m protected against legal action, right?

No. Ignorance is no excuse. Every company must adhere to regulations of some kind. All of us must follow the law.
But the need to meet legislated regulations goes even higher in select disciplines and industries. Safety & Health is the most stringent because people’s lives are at risk, and that’s why the penalties for non-compliance can result in business shutdowns and imprisonment, especially where the State can prove that your conduct didn’t exhibit due care (negligence).
VirtualSafety provides records evidencing that a particular process is and was followed at a particular moment in time.
The amount of regulations that one needs to adhere to these days is staggering and can create a challenging task for the Safety & Health person who needs to prove that these standards and regulations are being adhered to.
Business requires effective records management, as it would be otherwise impossible for someone to stand up to an audit and present adherence if the records hadn’t been collected and collated in real-time consistently for the months or years prior.
To be able to evidence regulatory adherence, you need to keep on top of your records consistently. You need to have it systemized. VirtualSafety does this all for you.

So does VirtualSafety offer a layer of legal protection to my business?

Yes. You need to be able to show your company has been acting and operating appropriately if ever the Authorities come knocking, and the point is; records cover your back.
Case Study: Golf Club (2017)
VirtualSafety was subpoenaed to produce all communication between one of our customers and ourselves. The customer, in this case, was a prominent golf club, and the action against it was civil, not statutory. The injury occurred when the wind blew over a tree on the golf course, striking a player. The player was badly injured and became paralyzed. The claim was for over $2.8 million.
The case was set to run for ten days in the Supreme Court; however, on the seventh day, VirtualSafety’s Workplace Health and Safety audit trail was called into evidence. Because this customer had been with VirtualSafety for over seven years, we were able to prove this customer was addressing their Safety and Health responsibilities to the Court.
VirtualSafety does four things very well; create, gather, store,  and produce evidence.
Although VirtualSafety was not called to attend the trial, the manager of the golf club was, and here is their response in their own words:
“Things weren’t looking too good for the club until our lawyer (defense) started reading out some of the HUGE amounts of signed paperwork which VirtualSafety had stored and sent into the court. Within a short time, an adjournment was called by the prosecution team, and an out-of-court settlement was quickly reached ….. there was no way we were going to win this case until this happened.”
Although the settlement was for an undisclosed amount, it is important to note that the club was pleased for two reasons; they were not found not guilty, so there was no prosecution, and the settlement was considerably less than what was sought after by the plaintiff. VirtualSafety has been designed to be a simple, user-friendly app system; however, in court, which it was designed to handle, it proves to be an extremely powerful tool in producing required evidence to stop a prosecution.

Owing to VirtualSafety’s Records Management, Corporates utilize us as an essential partner in their Corporate Brand Protection. Specifically, VirtualSafety handles corporates with national or international footprints to include much more than legal compliance, but also compliance with Corporate Policies.

Can I go to my worksites and conduct Annual Audits using my smartphone only?

Yes, you do not need your clipboard and pen. Our audit system is paperless and walks you through all the steps. Upon completion, whilst still on-site, you may elect to print or email your completed Safety and Health report immediately.

Why is VirtualSafety the perfect system for me?

There are two main reasons why VirtualSafety is so attractive to users:

A) Users benefit from our pooled knowledge. That is, VirtualSafety offers a classic Clique Network whereby our professional safety and health consultants are all connected to each other sharing best fit and best fix solutions to save you time and money.

This in Economics is known as Comparative Advantage.

B) Users benefit from our Network Effects which occurs when a product or service becomes more valuable to its users as more people use it.

We currently look after more than 10,000 workers and a classic hub and spoke network is clearly visible since VirtualSafety consultants are exposed to multiple different scenarios in rapid succession per day, thus gaining invaluable expertise to provide you with the best fit and best fix solutions to save you time and money.

This in Economics is known as Comparative Advantage.

Together, these two comparative advantages give VirtualSafety an Absolute Advantage, as it is known in Economics.

Can I watch a video showing how it works?